When creating a GT3 car, it's always helpful to have something to work with and the production version of the BMW Z4 certainly provided the boffins at BMW Motorsport with a decent head start.

There are some obvious aesthetic divergences between the Z4 GT3 and its road-going sibling but its heritage is as plain to see as the gargantuan wing emerging from its elegant posterior. To discover the real differences between the two cars, you have to dig a little deeper.

For a start, many of the Z4 GT3's components have been manufactured using ultra-lightweight carbon fiber reinforced plastics, which has contributed to a total weight of not much over a ton. Underneath its elongated hood, meanwhile, there lies an M3-derived 4.4-liter V8 engine which can crank out a whopping 515 bhp, and a sequential six-speed gearbox that channels all that power to the rear wheels.

In its first year of racing, the car proved competitive in the FIA GT3 European Championship as well as emerging victorious from the Dubai 24 Hour endurance event. Purchase the BMW Z4 GT3 now and extend that early promise onto the Simraceway tracks. 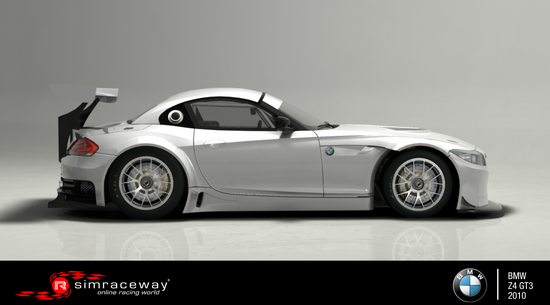