Like its predecessor in 2010, the MP4-26 proved extremely competitive during the 2011 Formula One season, leading Vodafone McLaren Mercedes to second-place in the Constructors' Championship for a second consecutive season and Jenson Button (2nd) and Lewis Hamilton (5th) to respectable positions in the Drivers' Championship.

Sporting a raised nose, an innovative U-shaped sidepod arrangement, and a longer wheelbase than the MP4-25 , the MP4-26 was designed with downforce maximization in mind following the banning of double-diffusers prior to the start of the season. It also featured a Mercedes-designed, engine-mounted KERS system after the constructors had agreed to end the self-imposed ban that had been in force throughout 2010.

During the 19-race season the MP4-26's Mercedes FO 108Y engine, which it shared with the Mercedes GP Petronas and Force India teams, carried Hamilton and Button to three wins each and an impressive 18 podium finishes in all.

To discover for yourself how well the McLaren engineers overcame the issues caused by the double-diffuser ban and, more importantly, to drive one of the 2011 Formula One season's top two cars, take the McLaren MP4-26 out onto the Simraceway tracks now. 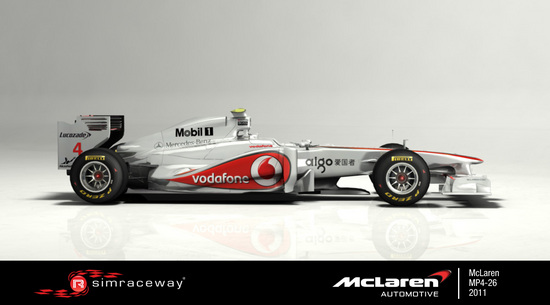