Heir to the super-successful RX-7, the Mazda RX-8 was first produced in 2003 -- although its roots can be traced back to the 1995 RX-01 concept car, which was powered by an early ancestor of its 13B-MSP rotary engine.

Part of the first RX-8 generation, the 2007 model quickly set about bettering its celebrated forebear's near-perfect handling, partly thanks to its new, ultra-compact powerplant, which could fit rearwards of its front axle.

It couldn't match the RX-7 for raw power -- or, indeed, success on the track, despite two victories at Daytona in 2008 and 2010 -- but its increased fuel efficiency and lower emissions allowed it access to the lucrative North American market, something that had been denied to the final two series of its 13B-REW-powered predecessor.

On top of its bijou qualities, the 1.3-liter RENESIS 13B-MSP was super-light, which further aided handling as well as giving the 250 horses unleashed by this "High Power" model less to drag behind them. This resulted in a still-respectable acceleration of 0-60 mph in 6.0 seconds and a top speed of 150 mph.

To get your hands on the RX-7's spiritual successor, grab the Mazda RX-8 today on Simraceway. 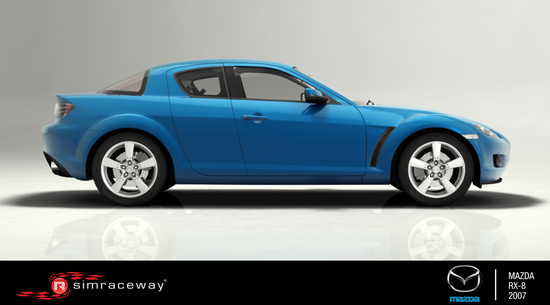